Unfortunately due to the current climate and the uncertainty that COVID-19 has brought upon us all, there are no planned PA Sports event at the moment.
We will continue to monitor the situation and will have our amazing PA sports events back up and running as soon as the guidance suggests that it is safe to do so.

On Tuesday afternoon, a selection of pupils were chosen to represent SJSJ in the PA Games Netball competition which took place at Gainsborough Primary School, in Hackney Wick. The children outdid themselves and managed to stay out in first place right up until the competitions finals in which they came up against Gainsborough. Unfortunately the final resulted in a 2-0 loss for SJSJ but the children played supremely and were all incredibly proud of their achievements. The team finished this years competition in second place which is a huge improvement on last years fourth place position. Well Done to all of the children that took part! 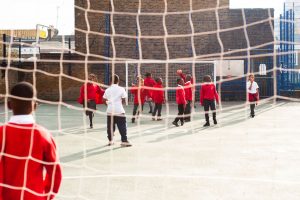 On Tuesday afternoon, some children were lucky enough to attend the first round of the Primary Advantage Football League at Gainsborough Primary School. The event saw over 80 children take part in 15 matches, scoring a total of 29 goals. Team SJSJ showed real sportsmanship and managed to concede 3 goals and go on to win 3 of their 4 matches. Well done to all of the children who took part; you should be very proud of yourselves!

On Tuesday afternoon, a selection of girls across year 5 and 6 were lucky enough to be selected to take part in the PA Games Gymnastics competition, which was held at Gainsborough Primary School. The team spent a few hours putting a routine together and then performed it in front of a panel of judges. The children came fifth place in the competition – they should be very proud of themselves!